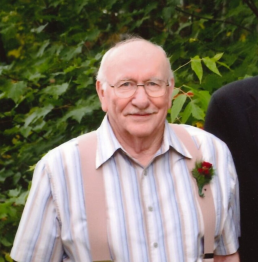 Alfred (Al) Bowers, 93, Brainerd, MN, passed away Tuesday, September 6, surrounded by family at his home.
Al was born in Zwingle, Iowa to Alfred and Clara (Sprague) Bowers. He served in the US Navy (1946-1950), including a World Peace Cruise, stopping in 38 countries, and traveled through the Panama Canal. Al and his wife Miriam (Easton) met through friends and were married on February 17, 1951 and celebrated 65 happy years together. Al retired from BN Railroad as a welder, and Miriam retired from the Brainerd School District as a cook.
Al & Miriam took advantage of all that retirement has to offer, taking their RV on adventures across the country. With the freedom to go anywhere, they attended their grandchildren’s and great grandchildren’s football games, school programs, and graduations.
Al was an avid Vikings fan, recording every game, but keeping only the games they won to watch again in the offseason. During the spring and summer, Al & Miriam enjoyed attending flea markets and garage sales together. Between Al’s negotiation skills and Miriam’s eye for finding furniture in need of repair (by Al), they made a great team.
Al & Miriam’s home was central to family gatherings, especially Thanksgiving. Four generations all under one roof resulted in a full house. There was a warmth in the air, and not just from the oven working overtime as Miriam prepared a Thanksgiving feast. Out of convenience, Christmas was also celebrated in November. At the end of their hosting duties, Al & Miriam would look at the personalized stockings above the fireplace, and the photo wall of their grandchildren, and marvel at what they created together.
Whether Miriam was using her green thumb to nurse plants back to health, Al was ice fishing or working on a project in the garage, they enjoyed the life they built together and remind us all to do the same.
Al is survived by his children, Deb (Steve) Borg, Rod (Linda) Bowers, Randy (Vicky) Bowers, and Scott (Janet) Bowers, 11 grandchildren, 20 great grandchildren, two great great grandchildren, and one schnauzer, Smokey. He was preceded in death by his wife Miriam in September of 2016, brothers Francis, Howard, and Vincent, parents Alfred and Clara, and three great grandchildren.
Memorial service for Al will be held on Saturday, September 10, 2022 at 11am at Halvorson Taylor Life Events Center. Visitation will be one hour prior. Interment will be at the MN State Veterans Cemetery.