To share your memory on the wall of David Miller, sign in using one of the following options:

Dave enjoyed and spent many hours working on & driving his stock car #11 at North Central
Speedway in his younger days. When Dave stopped racing he took up a love for watching
Nascar racing.

Dave was employed at Burlington Northern Railroad. In 1982 Dave & his Father-in-law Donald
Pederson started Sleepy Hollow Millwork south of Brainerd. In 1989 Dave and his wife Donna
moved the family to Milbank, SD to start their own branch of Sleepy Hollow Millwork. In 1999
they returned to Brainerd and he finished out his career at BNSF.

In 2018 Dave and Donna moved to Lake Cochrane in Gary, SD which had been a beloved
family location for years. He loved entertaining his grandchildren and spent many hours taking
them fishing, pulling them around the lake on tubes, and cruising on the pontoon.

There will be a small service held at a later date.

Print
A memorial service will be held at a later date.

We encourage you to share your most beloved memories of David here, so that the family and other loved ones can always see it. You can upload cherished photographs, or share your favorite stories, and can even comment on those shared by others.

Posted Jul 27, 2020 at 10:53am
My sincere sympathies to Dave's family. Growing up watching the stock car races in Brainerd was a fun part of my childhood and i so remember Dave and his car and his wonderful character on the track and off. I am sure he will be missed so much by his family and friends, God Bless and Be with you all in your time of loss. 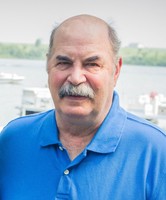