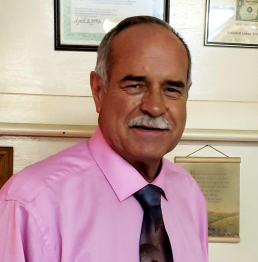 David Martin Schonrock was born January 29, 1955, in New Ulm, MN. His parents were the late Martin and Hazel (Hoffmann) Schonrock. He is the second born of three children. He had many enjoyments throughout his life. He loved hunting and fishing with his dad in his younger years. His passion for German cuisine started from Lenny’s Meat Market in New Ulm. This love eventually started the New Ulm Sausage Haus and Sandwich Shop. David also loved to travel and took many special trips with family that he spoke of often and held dear to his heart.
David met the love of his life Nancy Ramsdell and was united in marriage. This marriage was blessed with a daughter, Ashley Violet. David tragically lost them far too soon in a car accident in January 1994.
David also had a car accident of his own that led to many medical issues over time that he battled. Over the years he always joked he was the bionic man.
David was blessed with two other children, Stephanie Schonrock and Kevin Nelson.
Over the years David enjoyed several different careers: he worked at Traulich Estates, Sears, 3M, drove semi-truck and eventually settled back with his calling of making sausage. This was when he started the New Ulm Sausage Haus in Baxter, MN. He was especially known for his jerky, and it was one of his top sellers over the years.
David was known for being the most caring, kind and loving person. He will be greatly missed by many.
David had a love for his fur babies. These pups were his children that he took care of dearly. Dave has had Jack since he was a puppy, and Jack is now 23 years old. Other fur babies: Abby, Lacy, Pearl, J.J., D.J., Precious, Moose and Little Bear. David had a truly special dog, Pokey, that was with him for 16 years that had passed.
David was diagnosed with cancer in January 2022, and this is what took his life far too soon. He passed at home January 31, 2022, with a dear friend of his and family taking care of him.
Although we miss him dearly, we rejoice in knowing David has been reunited with his wife and daughter. As David said, “A family in life and a family in death, together until the end of time”.
David is preceded in death by both of his parents, Martin and Hazel Schonrock, Nancy Schonrock (wife), Ashley Schonrock (daughter), and Uncle Jim Schonrock.
He is survived by his sisters: Diane (Richard) Evans, and Mary Ellen Schonrock. Daughter: Stephanie Schonrock and son: Kevin (Steph) Nelson. Grandchildren: Gunner Bame, Wayne and Jedd Nelson. Niece and Nephews: Jessica Sperl, Justin Sperl, Robert Schonrock. A host of other family and friends as well as his fur babies.
A funeral will be held at Trinity Lutheran Church of Brainerd, MN on February 12, 2022. Service will be held at 10:00am with refreshments and time to visit together and celebrate David afterwards.