To share your memory on the wall of Eleanore Aarrestad, sign in using one of the following options:

Receive notifications about information and event scheduling for Eleanore

We encourage you to share your most beloved memories of Eleanore here, so that the family and other loved ones can always see it. You can upload cherished photographs, or share your favorite stories, and can even comment on those shared by others.

Posted Jan 20, 2019 at 10:50am
Our sincere sympathy for the loss of Ellie. She will be remembered as a great nurse and a kind lady.
Lila and Harold Moen
Comment Share
Share via:
VS

Posted Jan 19, 2019 at 12:54pm
Our sympathy to all on your loss from old neighbors..Such a wonderful and caring lady. . Val (Walla) and Bob Somerville, Monticello
Comment Share
Share via:
PM

Posted Jan 18, 2019 at 11:28am
I am very sorry to hear of Ellies death. She was always so kind to the nursing students that I brought to St. Joseph's medial center.
Pat Mccormick
Comment Share
Share via:
CM

Posted Jan 18, 2019 at 08:19am
May your wonderful memories of Ellie's beautiful life provide peace and joy always.

Travis and Hillary purchased flowers for the family of Eleanore Aarrestad. 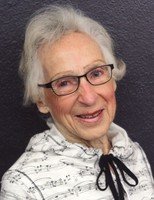