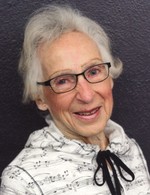 Eleanore “Ellie” Aarrestad, Age 88 of Brainerd passed away January 16, 2019 in her home. Ellie was born in Osakis, MN to Henry and Mabel Fynskov on August 6, 1930. A few years later her brother Paul was born and they enjoyed life on the farm. After high school Ellie attended Concordia Morehead to study nursing. She also met Ernest, a dashing young musician from Illinois. She received her RN degree from Fairview Hospital in 1952. That same year Ernie took her down the aisle to begin their marital adventure. Quickly Ernie headed out to basic training and Ellie began working in Alexandria, MN. Soon after they joined up in Lawton, OK where she continued nursing work. Ernie played in the army band and after his discharge they moved to Pequot Lakes, MN. There she worked at a Dr’s. office and their first child, Pam was born. Ted was born two years later and they moved to Brainerd, MN in 1958. Ellie worked as a nurse at St. Joseph’s Hospital where she remained for the rest of her career. She took some time off with the birth of her next 2 sons Thomas and Phillip. Ellie tirelessly raised the family with Ernie and then began studies in the 1980s for her bachelor’s degree from St. Scholastica, graduating in 1988. A few years later at the age of 58 she joined Ernie in retirement and began living the life.
This great duo enjoyed living in Florida for many winters and took up tennis, golf and a busy social life. In continuing to look for new fun things to do, Ellie enjoyed participating in Geritol Frolics for many productions, getting back to square dancing and camping more with Ernie. They also traveled in the states and abroad and enjoyed their growing number of grandchildren.
Ellie was involved in many groups as a long-standing member of Trinity Lutheran Church through the years as well as AAUW, Crossing Arts Alliance, Ray’s Promenaders and others.
Ellie was known for her especially caring, sweet ways backed up with a strong set of values and silent tenacious spirit. She always served as an incredible and inspiring example that included a positive attitude, rolling with the tough challenges life brought and forever loving others more then seemed possible. We will miss her and we thank all those who have been in her life. Now she is at peace with our Lord and Savior who called her to faith. He blessed all of us in sharing Ellie.
Ellie is survived by her husband Ernest Aarrestad; children: Pam (Dan) Borg, Ted (Jenifer) Aarrestad, Tom (Carolyn Kuether), Phil (Kay) Aarrestad, nine grandchildren and eight great -grandchildren.
Ellie is preceded in death by parents Henry and Mable Fynskov; and brother, Paul Fynskov.
Funeral service for Ellie will be held on Monday, January 21, 2019 at 3PM at Trinity Lutheran Church. Visitiation will be one hour prior to the service. Interment will be at Vaale cemetery in the Spring.
Memorials are preferred to the Trinity Lutheran food shelf.