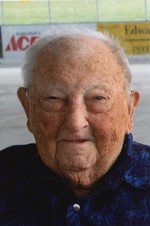 Glenn Marvin Pilgrim, age 89, of Pillager, MN, passed away on Thursday, November 19, 2020 at home with his family by his side. Glenn was born January 5, 1931 in Town of Wein, Edgar, WI to Gustave and Mary (Flegel) Pilgrim. He married the love of his life Louise Williams on April 26, 1952. Glenn worked as a diesel mechanic at various trucking companies in WI and MN until he retired in 1993. He enjoyed traveling, camping, working on and displaying antique double fly wheel gas engines. He most enjoyed spending time with his family, especially his grandchildren and great-grandchildren. In recent years Glenn enjoyed going on car rides and eating out.
Left to cherish his memory are his children Gail (Ray) Karls of Molt, MT, Gary (Kim) of Pillager and Gene (Marla) of Pillager; grandchildren: Jason (Clarissa) Pilgrim of New Auburn, MN, Angela Henning of Minneapolis, MN, Amanda (Jesse) Brock of Columbia Heights, MN and great-granddaughters; Haley and Justine Brock.
Glenn is preceded in death by his spouse Louise, his parents; infant son, Michael Lee; and all of his brothers and sisters and their spouses.
A private gravesite service will be held for the family. A memorial service will be planned for the summer/fall of 2021.