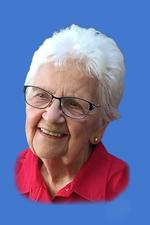 Joni passed away peacefully at home surrounded by family on February 14, 2021. She was born on July 20, 1936 to William and Jessie Hansen in Brainerd, MN. She was raised on the family farm just south of Brainerd. She was a proud attendee of District 3 (Hughey School) through the eighth grade, graduated from Washington High School in 1954, and attended Concordia College in Moorhead, MN before marrying Kenneth Hill in December 1955. Kenny was in the Marines in California and both daughters (Karen and Margaret) were born there. But it was not long before they returned to Minnesota, where they resided in Fargo/Moorhead for a time before settling in Nisswa and Brainerd.

Joni was employed by Crow Wing County Social Services and enjoyed many work friendships there. She sorely missed keeping in contact with those folks as she became more housebound and as COVID emerged. While she was working for Crow Wing County, she completed her degree at Metro State University. She loved school and learning. Upon her retirement in 1996, she happily volunteered at the Habitat for Humanity and The Race for the Cure, among others. Also, in retirement, she enjoyed a bailiff position at the Crow Wing County Courthouse, where she sported the requisite uniform but was armed with only a clipboard rather than a weapon. It was there, as always, she was able to express her gift for engaging others while also utilizing her organizational skills. Joni was a member of Trinity Lutheran Church where she greatly enjoyed the fellowship and expressed her faith through service. She particularly excelled at inclusion, and engaging and welcoming others, which was put to good use working in the new member program at Trinity.
People were her main focus and thus she wasn’t really one for hobbies though she did love to travel. She greatly enjoyed helping form the local chapter of the Danish Sisterhood—Amber Lodge #186—as she furthered her exploration of her family’s Danish heritage through several trips to Denmark. Her grandparents had come over from Denmark and purchased the land for the family farm in Brainerd in 1885.

Joni did enjoy a sporting period of time in her life where she played softball and racquetball. She often recalled when she and her friend Peggy Larson took racquetball lessons from Joey Halvorson (“racquets up ladies”). She also was a proud member of the Class of ‘54 and enjoyed reunions and get togethers with her classmates.

She was preceded in death by her parents, her husband Kenny, and her sister Irene Hanson. She is survived by her daughters, Karen Hill (Patty Hanneman) of Durham, NC, and Margaret Hill of Brainerd; her brother, Bill Hansen, and her many nieces, nephews and cousins, all of whom were very supportive of her during her life and as her life was ending.
The family wishes to thank friends and family, particularly Harley and June Ellis, Dave and Jana Hansen, Trinity Lutheran Church, Knute Nelson Hospice, Home Instead, neighbor and friend, Betty Kirschner, and caregiver and friend, Laurel Allord.

Halvorson-Taylor will be handling the arrangements. A memorial service will be held at a later date.

Memorials may be directed to The Michael J. Fox Foundation for Parkinson’s Research.