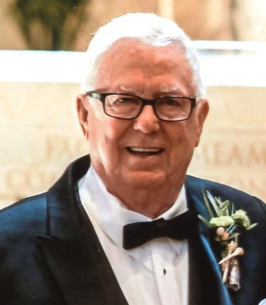 Milton (Milt) Eldred Halverson, 91, of Brainerd, passed away on Wednesday August 17, 2022, at Essentia
Health-St. Joseph's Hospital. Milt was born in St. Cloud, Minnesota on June 10, 1931, to Mildred (Walsh) and Milton A. Halverson. He married his high school sweetheart, Rhodora (Rhodie) M. Larson, in San Francisco, on January 14,1952. Milt and Rhodie celebrated their 70th wedding anniversary in January 2022 and have cherished their spiritual growth with First Lutheran Church in Brainerd.

Milt was a true Brainerd Warrior who often waxed sentimental about his football, basketball, and
baseball achievements during the 1948 and 1949 seasons. He lead the 1949 Warrior Basketball team to
the Minnesota State High School Tournament.

He enlisted and proudly served in the US Navy from 1951 to 1955 during the Korean War. Milt was very
proud of his honorary membership in the 194th Regiment Brainerd Minnesota and an active member
with the Brainerd American Legion and VFW.

After serving in the military, Milt had a long career in the Logistics industry serving as Senior
Management with several different organizations spanning multiple cities including the Twin Cities,
Kansas City, and Chicago.

Milt retired in the mid-1990’s and relocated back to Brainerd. He remained active with the Brainerd
Sports Boosters, Senior Center, and numerous other organizations.

A Memorial service for Milt will be held at 4:00 PM on Saturday, August 27th, 2022 at First Lutheran Church in Brainerd. Gathering of family and friends one hour prior to the service. Interment will be at 10 AM on Monday, August 29 at the Minnesota State Veterans Cemetery in Little Falls. In lieu of flowers memorials are preferred to be directed to the Milt Halverson family as organizational donations will be decided at a later date.