To share your memory on the wall of Nellie Karsten, sign in using one of the following options:

Receive notifications about information and event scheduling for Nellie

Print
Services for Nellie are private, due to the COVID 19 Virus.

We encourage you to share your most beloved memories of Nellie here, so that the family and other loved ones can always see it. You can upload cherished photographs, or share your favorite stories, and can even comment on those shared by others.

Posted Apr 08, 2020 at 10:57am
Our deepest sympathy to you. I always loved having Nell in choir at Zion. She was so creative. If we needed some funny words for a song, she could always come up with something. And she loved her grandchildren. She would always talk about them and how proud she was of them. God be with you in your loss. Gayle Mortensen
Comment Share
Share via: 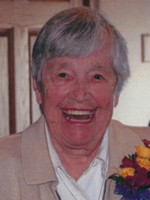