To share your memory on the wall of Robert (Bob) Knudson, sign in using one of the following options:

Print
Memorial Service on Saurday, August 29, 2020 at 11AM at Trinity Lutheran Church.


Robert Merle Knudson, 95, passed away on Wednesday, March 11, 2020 at Northern Lakes Senior Living in Baxter.
Bob was born in Tacoma, Washington to Fred and Olga (Berg) Knudson. His family moved to the Wadena area at a young age where he attended Wadena schools. He served his country during WWII in the U.S. Navy where most of his time was spent in the South Pacific. He married Loretta Johnson on June 2, 1950, and together they had 4 children. Bob worked for Crow Wing Power and Light for 43 years. He was a long-time member of Trinity Lutheran Church and the American Legion. In his spare time and during his retirement years he enjoyed his hobbies of wood working and taking care of his yard.
Bob is survived by his wife Loretta; children Karen Lander, Janet (Rick) Swanson and Gary Knudson; seven grandchildren and 11 great-grandchildren. He was preceded in death by his parents, son Greg Knudson, sister Marvel Clark, and grandchildren Kati Knudson and Kyle Swanson.
In lieu of flowers, memorials are preferred to the Trinity Lutheran Church youth group.

Receive notifications about information and event scheduling for Robert (Bob)

Print
Memorial service for Bob will be hed on Saturday, August 29, 2020 at 11AM at Trinity Lutheran Church.

We encourage you to share your most beloved memories of Robert (Bob) here, so that the family and other loved ones can always see it. You can upload cherished photographs, or share your favorite stories, and can even comment on those shared by others. 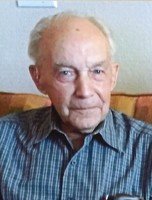